You’ve seen our pick of the Best Albums of 2014, so now let’s take a look at some of the best songs…

I still know next to nothing about this band, but I do know that their debut track, ‘Walk Away’ is probably one of the finest songs I’ve heard in a long time. If you don’t love this track by the end of it, then you should probably stop reading this post now and carry on doing whatever it is you were doing.

It’s the mystery of FKA Twigs that really attracts me to her music. I have no idea what genre it is. I have no idea who she is. And I like it that way. ‘Two Weeks’ is a great introduction to this unique artist, and if you think for one second that you know what to expect from her album, then you’re likely to find yourself pleasantly surprised. And very wrong.

Whether you like it or not, there’s probably someone out there listening to this song everyday and thinking about you. This is what indie music sounds like in 2014. Long live indie music!

Imagine if the movie Drive had been a disney film, and Taylor Swift was in charge of the soundtrack. ‘Style’ would have been Kavinsky’s ‘Nightcall’, and Ryan Gosling would have been Olaf from Frozen. This song is awesome!

*I can’t find a stream for this track, so here’s a picture of Swifty with her cat, Olivia Benson. 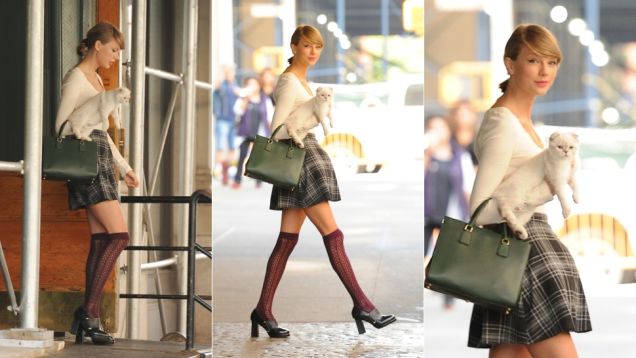 Now I know what your thinking, this song isn’t new, and it certainly wasn’t released in 2014. But that said, Azealia Banks‘ long awaited debut album did (finally) surface. And whilst it may not have been worth the seemingly unnecessary wait, it did remind me of how good this song is/was, and how good Banks can be when she is on top form.

On first listen, Lizzo‘s ‘Batches & Cookies’ may not be the finest example of her work, but it soon becomes apparent that this track is in fact a real gem. Her quick-lipped rapping and raucous attitude is a total pleasure to listen to, and if her debut album is anything to go by, then we can expect big things from her in the future.

Just when you think you are growing out of listening to pop-punk, along comes You Blew It! with their brilliant track, ‘Year of the Year Award’. They started 2014 in fine fashion, and seemingly set the standard for a great year for the ever-expanding genre.

I really hope that somewhere out there, there is a cereal-loving ‘hipster’ gently weeping into their bowl of Lucky Charms as they listen to this track.

Ryn Weaver appeared out of nowhere in 2014, with major label backing, and took the hype charts by storm with the catchy debut single, ‘OctaHate’. If this is the future of pop music, then that’s fine with me.

I don’t have any tattoos, but if I did, I’d hope that they would look as good as this song sounds.

The award for The Best Beard of 2014 is likely to be won by Chet Faker, but it’s his music that should grabbing your attention. His debut album, Built On Glass is a beautiful record that is home to a fantastic collection of tracks, and ‘To Me’ is one of the finest examples.

Karen O’s solo album, Crush Songs may have been a bit of a let down in terms of substance, but her return to music, outside of a new Yeah Yeah Yeahs album, was most welcomed. ‘Rapt’ is a beautifully delicate track that creeps around your mind. It’s O doing what she does best.

Haley Bonar’s album, Last War was great, but was way too short in my eyes. That said, her songwriting is truly wonderful, and the fact that Justin Vernon, aka Bon Iver, makes an appearance on a couple of the tracks only adds to her greatness. ‘Eat For Free’ shows off her charm perfectly.

Remix artist RAC has produced some absolute gold this year, and whilst I’m sure the original is fine, his rework of Bleachers energetic track, ‘I wanna Get Better’ is great! This could well be the song that reminds me of how great 2014 has been.