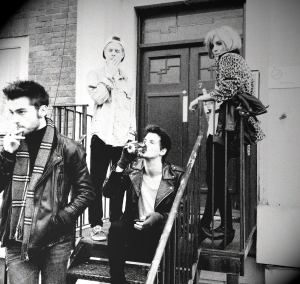 Brighton based noise-pop quartet Kill Moon are set to make “some pretty immediate waves” according to the NME. The band recently supported BBC Sound of 2013 winners Haim, and made a stomping appearance at this year’s The Great Escape Festival. Hound Magazine reckons that “their atmospheric power ballads recall 80s rock and more recent bands like Garbage”, adding “it sets the mood for an evening of high-energy rock.”

From relentlessly touring under a different guise for two years, the original trio locked themselves away, and then went back to the beginning, rising as Kill Moon with their long-term pal, housemate, and squatter-come-drummer Tom Dewhurst. The band’s influences of post-punk, heartbreak, grunge and outer space is an amalgamation that proves they have not only emerged, but are here to stay.

Catch them at The Book Club, Shoreditch on 6th June 2013.