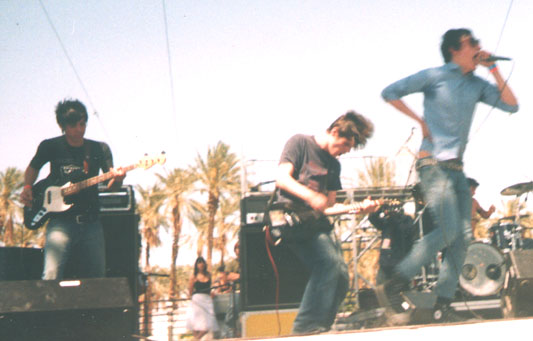 There is nothing quite like seeing a support band get booed for every moment they’re on stage. This is exactly what I witnessed when I saw The Kinison open up for Blink-182 way back in 2004. Chris Lewis, the lead singer, was prancing around the stage screaming his lungs out to a backing of screeching guitars and driving bass lines. Its safe to say that the audience was less than impressed. I remember reading an interview shortly after the shows where singer Chris recalled someone in the crowd throwing a phone at him during their performance. Lets face it, you’ve got to hate someone a hell of a lot to throw your phone at them.

Not everyones reaction to the band was negative though. I fell in love with them that night and I left the gig more impressed with their performance than I was with Blink’s. When I got home I managed to track down their 5 track EP Mortgage is Bank and bought it. The song New Way To Dance sounded incredible, blasting its way into my head and making me smile with the memories of the night we met. Shortly afterwards came the release of the bands first, and only, full length What Are You Listening To? It was recorded in just 15 days by the Refused producer Eskil Lovestrom. The record was perfect. It showed the band at their peek making amazingly groovy, hardedge punk. What more could you want? You’ll Never Guess Who Died was the only single to be released from the album, and after a couple of months of continuos touring, Chris Lewis left the band and they called it a day. I’m just so happy that I got to see them live, even if everyone else in the room hated them.